Amy Adams and Anna Kendrick Fire Up the Red Carpet

Twilight’s Anna rocks the champagne at the Los Angeles and London premieres of What to Expect When You’re Expecting, co-starring Cameron Diaz and Matthew Morrison. She switches it up with a glamorous print dress at the Toronto International Film Festival premiere of The Company You Keep, where she stars alongside Robert Redford and Shia LaBeouf.

The Fighter star Amy Adams, also of The Master fame, is flawless in stunning gowns at the Oscars, Golden Globes, and Screen Actors Guild Awards. She recently turned heads in a fiery engine-red dress at the premiere of her new film, Trouble With the Curve, starring Clint Eastwood and Justin Timberlake. 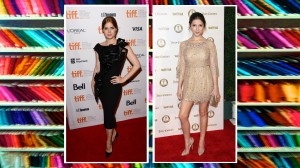 Taylor Swift at Grammys, Zooey Deschanel for Ralph Lauren, Home Galleries, and more on Tailor Made

The 2014 Grammy's happened on Sunday, January 26th and there some real lessons we learned from the likes of Taylor Swift in Gucci, Ciara in Emilio Pucci, Anna Kendrick in Azzaro and Joan Hornig, Sarah Hyland in Emilio...

Join Brian Rodda and the reigning Miss Hong Kong, Ms. Erin Tjoe, as they talk style, fashion, and more on Tailor Made. In this show they discuss, Kate Bosworth in a black and purple statement coat, Zoe Saldana in a ch...

Brian Rodda and Asha Dahya discuss the most inspiring models of 2013. Models often seem to represent the worst of the fashion industry, as the embodiment of fashion's obsession with perfection and the root of our b...